Vienna is one of the world’s most liveable cities, and social housing contributes significantly to this fact. Unlike other cities, Vienna does not leave rents and land prices solely to the free market. On the contrary: housing is viewed as a public task and part of the services of general interest.

For more than a century, Vienna has accorded political priority to the provision of affordable housing. Close to sixty percent of its inhabitants live in municipal housing estates or in dwellings subsidized by the City of Vienna. Year after year, the City Administration invests the amount of roughly Euro 500 million in housing construction and rehabilitation as well as in the direct financial support of persons with particularly low incomes. The high share of subsidized dwellings exerts a price-dampening effect on the private housing market and safeguards a good social mix throughout the city. Typically, in Vienna a person’s income cannot be gleaned from his or her home address – a fact we are proud of.

The roots of these extraordinarily innovative urban planning activities lie in the interwar “Red Vienna” period, when thousands of municipal dwellings were built. The aim was to provide affordable homes of good quality for a broad strata of the population, but in practice much more was achieved. The housing scheme created complexes which met the criteria of giving people access to “light, fresh air and sunshine”, while also providing them with nurseries, schools, lending libraries and communal facilities such as  laundry rooms.

Between the ground-breaking ceremony for Vienna’s first municipal housing complex, the Metzleinstaler Hof, in 1920 and the current SMART flats program, the City of Vienna has built 220,000 municipal dwellings for half a million tenants and fostered the building of further 200,000 subsidized apartments. The municipal housing program of the City of Vienna - recognized far beyond Austrian borders - continues to make a decisive contribution to the excellent housing standards and quality of life in our city.

Is it true that more people live in Vienna‘s municipal housing complexes than in Graz, capital of the province of  Styria? And, if you placed all the lifts in those complexes on top of each other, would they reach to the top of the Himalayas?

are maintained by Wiener Wohnen. That‘s an area equivalent to 854 football pitches.

live in one of the 1,800 municipal housing complexes of Vienna.

are let and managed by Wiener Wohnen. That‘s equivalent to the surface area of a fourmetre-wide road from Madrid to Stockholm.

can be found in Vienna‘s municipal housing complexes. Placed one on top of the other, they would make a tower twice as high as the Himalayas. 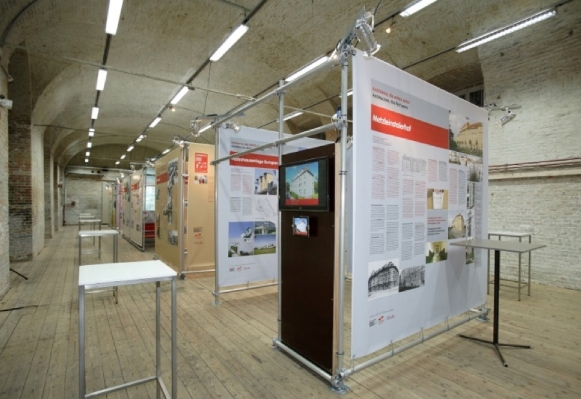 "The municipality is building. Vienna residential construction 1920 to 2020“

is a travelling multimedia exhibition dealing with the importance of social apartment construction in Vienna. Since the early days in Austria´s 1st Republic in the 1920s „Red Vienna“ social residential construction has changed many times and adjusted to new social framework conditions. At the moment the very fast growing city as well as the economic and ecological framework-conditions require a continuous development of social apartment construction. The exhibition illustrates the continually changing challenges and solutions of Vienna‘s residential policy over a period of almost 100 years. The bandwidth of subjects ranges from architecture to economic basics, from visions to implemented investments.

The exhibition is in German and English as well as in English and French and could be seen already i.a. in Vienna at the architectural center AZW, in the gallery Aedes in Berlin, in Trieste in Italy at the Viennese Salon, parallel to the ERHIN Award ceremony in the European Parliament in Brussels or at the University of Maryland in Washington, USA.

The Viennese Model of Social Housing

A story of success

The history of cities, regions and countries within the European Union evolved quite differently. Therefor – among other things - the housing situation differs a lot and we face a broad variety of housing conditions, political traditions and housing systems.

In recent years the developments of the international financial markets were one of the main reasons of continuous and exorbitant increases of apartment-prices. Therefor an increasing number of low- and middle-income-people in the EU struggle to finance their housing-needs. They have to find their homes more and more in houses with poor conditions, in the periphery or are even threatened by eviction.

The exhibition “The Viennese Model of Social Housing” shows the way the city of Vienna chose to provide the Viennese population with attractive and affordable living space and could be seen already i.a. in Lyon at the International Social Housing Festival and at the cultural center ZIL in Moscow.